Pearl Media is the preeminent leader of 3D mapping projection in the US.  At the conclusion of 2011, Pearl Media will have executed more 3D projections than any other company globally and all other companies in the US combined!

Over the next three weeks, we will be transforming some of the most iconic buildings around the country into unique, jaw-dropping 3D experiences. 3D-cember will culminate with the largest INTERACTIVE 3D mapping projection allowing people to control massive 3D elements on a building.  We urge everyone to come out and become a part of history as Pearl Media will enter into the Guinness Book of World Records with this feat. 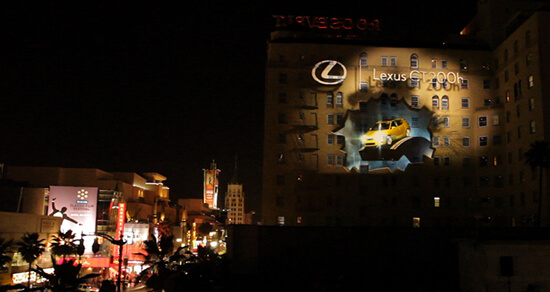 Pearl Media deployed a massive 3D projection on the side of San Diego’s PETCO Park during Comic-con 2011 to promote the launch of THQ’s upcoming new video game Saints Row®: The ThirdTM. The 3D projection mapped the contours of PETCO Park, offering consumers a unique and never-before-seen three-dimensional view of the main characters smashing through the walls of PETCO Park, all without the use of 3D stereoscopic glasses.

Pearl Media produced and displayed a massive 3D building mapping projection to promote the DVD release of X MEN First Class by Fox Home Entertainment.  The enormous 3D projection showcased the powers and transformations of the main characters of X MEN First Class at the famous Roosevelt Hotel.  Thousands of pedestrians were able to witness the X MEN transform the facade of the Roosevelt Hotel with flying objects, water, ice, fire, tornadoes and even submarines coming out of the building.  Pearl Media’s proprietary 3D Mapping projection technology allows for large objects to come to life in real time high definition 3D without the use of stereoscopic glasses.  The program was witnessed by thousands on the street and thousands of more online and through social media outlets.

Subscribe to Pearl Media’s 3D-cember Rss Feed for up-to-date information about upcoming events, the most in-depth press and analysis, and a first look at exclusive videos of our jaw-dropping executions. Click Here and prepare for 3D-cember . For more info and interactions, Follow us on Twitter, Like us on Facebook, and enjoy #3D-cember.

Random Pearl Quote of the Week: “We're all just visiting, all just breaking like waves. The oceans made me, but who came up with love?” - Pearl Jam BERMUDA @ BROOKFIELD PLACE Bermuda, Bahama, Come on pretty mama!  Bon Voyage to...